The Fender Stratocaster is a model of electric guitar designed from 1952 into 1954 by Leo Fender, Bill Carson, George Fullerton, and completed by Freddie Tavares. The Fender Musical Instruments Corporation has continuously manufactured the Stratocaster from 1954 to the present. It is a double-cutaway guitar, with an extended top "horn" shape for balance like the Precision Bass guitar. Along with the Gibson Les Paul and Fender Telecaster, it is one of the most-often emulated electric guitar shapes.[1][2] "Stratocaster" and "Strat" are trademark terms belonging to Fender. Guitars that duplicate the Stratocaster by other manufacturers are usually called S-Type or ST-type guitars.

The first models had a serial number imprinted on the Bakelite back plate. After mid-1954, the four-digit serial number was stamped into the steel heel plate.

In 1960, the available custom colors were standardized with a paint chip chart, many of which were Duco automobile lacquer colors from DuPont available at an additional 5% cost. Inter-departmental Dupont support research provided a flexible basecoat for their wood applications.

These specific features in the evolution of the Stratocaster included:

After 1965, the Fender company, under the control of CBS Instruments, saw a drop in quality control meaning lower quality build and lower grade instruments for customers. Despite this, the popularity of Jimi Hendrix in the late 1960's saw a resurgence in sales due to his fondness for the instrument.

However, after 1974, the increased production of lower quality instruments by the company saw the advent of the Japanese entering the market to produce replicas of the pre-1966 Stratocasters. 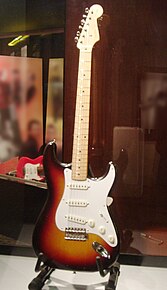 Original Stratocasters were manufactured with five vibrato springs (three in late 1953 prototypes) attached to a milled inertia block and anchored to the back of the body. The novel mechanism pivots on a fulcrum design with a six screw bridge plate, allowing the whole set up to "float" while transferring the strings energy directly into the body. Though advertised as "Tremelo" (a change in volume amplitude), vibrato is the correct term for pitch variation. In the floating position, players can move the bridge-mounted vibrato tremolo arm up or down to modulate the pitch of the notes being played. Hank Marvin,[9] Jeff Beck[10] and Ike Turner[11] have used the Stratocaster's floating vibrato extensively in their playing.

As string gauges have changed, players have experimented with the number of springs (often four though Hendrix used five). As the average gauge has decreased over the years, modern Stratocasters are equipped with three springs as a stock option in order to counteract the reduced string tension. While the floating bridge has unique advantages for wavering pitch upwards (like Jeff Beck), the functionality of the "floating" has been widely accepted, yet disputed by some musicians. Leo insisted it leave the factory floating (raised up in the back) while designer Freddie Tavares preferred it tightened flush for full bridge plate/body contact resonance. As the bridge floats, the instrument has a tendency to go out of tune during double-stop string bends. Many Stratocaster players opt to tighten the springs (or even increase the number of springs used) so that the bridge is firmly anchored against the guitar body: in this configuration, the vibrato arm can still be used to slacken the strings and therefore lower the pitch, but it cannot be used to raise the pitch (a configuration sometimes referred to as "dive-only").

Some players, such as Eric Clapton and Ronnie Wood, feel that the floating bridge has an excessive propensity to detune guitars and so inhibit the bridge's movement with a chunk of wood wedged between the bridge block and the inside cutout of the tremolo cavity, and by increasing the tension on the tremolo springs; these procedures lock the bridge in a fixed position. Some Stratocasters have a fixed bridge in place of the vibrato assembly; these are colloquially called "hard-tails". There is considerable debate about the effects on tone and sustain of the material used in the vibrato system's 'inertia bar' and many aftermarket versions are available.

The Stratocaster features three single coil pickups, with the output originally selected by a 3-way switch. Guitarists soon discovered that by positioning the switch in between the first and second position, both the bridge and middle pickups could be selected, and similarly, the middle and neck pickups could be selected between the 2nd and 3rd position.[12] When two pickups are selected simultaneously, they are wired in parallel which leads to a slight drop in output as slightly more current is allowed to pass to the ground. However in newer guitars, since the middle pickup is almost always wired in reverse (and with its magnets having opposite polarity), this configuration creates a spaced humbucking pair, which significantly reduces 50/60 cycle hum. In 1977 Fender introduced a 5-way selector making such pickup combinations more stable.[13]

This setting's characteristic tone is not caused by any electronic phenomenon—early Stratocasters used identical pickups for all positions. This "in between" tone is caused by phase cancellation due to the physical position of the pickups along the vibrating string. The neck and middle pickups are each wired to a tone control that incorporates a single, shared tone capacitor, whereas the bridge pickup, which is slanted towards the high strings for a more trebly sound, has no tone control for maximum brightness.

On many modern Stratocasters, the first tone control affects the neck pickup; the second tone control affects the middle and bridge pickups; on some Artist Series models (Eric Clapton and Buddy Guy signature guitars), the first tone control is a presence circuit that cuts or boosts treble and bass frequencies, affecting all the pickups; the second tone control is an active midrange booster that boosts the midrange frequencies up to 25 dB (12 dB on certain models) to produce a fatter humbucker-like sound.

Dick Dale was a prominent Stratocaster player who also collaborated with Leo Fender in developing the Fender Showman amplifier. In the early 1960s, the instrument was also championed by Hank Marvin, guitarist for the Shadows, a band that originally backed Cliff Richard and then produced instrumentals of its own. In 1965, George Harrison and John Lennon acquired Stratocasters and used them for Help!, Rubber Soul and later recording sessions; the double unison guitar solo on "Nowhere Man" is played by Harrison and Lennon on their new Stratocasters.[15][16][17][18]

After the introduction of the Fender Stratocaster Ultra series in 1989, ebony was officially selected as a fretboard material on some models (although several Elite Series Stratocasters manufactured in 1983/84 such as the Gold and Walnut were available with a stained ebony fretboard). In December 1965 the Stratocaster was given a broader headstock with altered decals to match the size of the Jazzmaster and the Jaguar.

During the CBS era, particularly the 1970s, the perceived quality of Fender instruments fell. During this time, vintage instruments from the pre-CBS era became popular.

When the Fender company was bought from CBS by a group of investors and employees headed by Bill Schultz in 1985,[19] manufacturing resumed its former high quality and Fender was able to regain market share and brand reputation. Dan Smith, with the help of John Page, proceeded to work on a reissue of the most popular guitars of Leo Fender's era. They decided to manufacture two Vintage reissue Stratocaster models, the one-piece maple neck 1957 and a rosewood-fretboard 1962 along with the maple-neck 1952 Telecaster, the maple-neck 1957 and rosewood-fretboard 1962 Precision Basses, as well as the rosewood-fretboard "stacked knob" 1962 Jazz Bass. These first few years (1982–1984) of reissues, known as American Vintage Reissues, are now high-priced collector's items and considered as some of the finest to ever leave Fender's Fullerton plant, which closed its doors in late 1984.[20]

In 1985, Fender's US production of the Vintage reissues resumed into a new 14,000 square-foot factory at Corona, California, located about 20 miles away from Fullerton.[20] Some early reissues from 1986 were crafted with leftover parts from the Fullerton factory. Fender released their first Stratocaster signature guitar for Eric Clapton in 1988.

Fender has also manufactured guitars in East Asia, notably Japan, and in Mexico, where the affordable 'Player' series guitars are built.

The Strat Plus was produced from 1987 to 1999 and was equipped with Lace Sensor pickups, a roller nut, locking tuners, a TBX tone control and a Hipshot tremsetter.[21][self-published source][22][self-published source] The Strat Plus Deluxe was introduced in 1989 with pickup and tremolo variations. The Strat Ultra was introduced in 1990, again with pickup variations, and also with an ebony fingerboard.

The Fender Custom Shop produced an entry level, team built Stratocaster that was discontinued in 2008. The Custom Classic Strat was considered to be a high end guitar that was above the American Deluxe Strat. The American Deluxe was at the time, the most expensive model produced at the Corona, California factory.

The Custom Classic Strat was intended to be the combination of the best aspects of vintage and modern Strats. The guitar boasted 3 Modem Classic pickups, with the bridge pickup being wound "hotter" and was called a Hot Classic. The bridge was a Custom Classic 2-point tremolo.